Quite something, how hard working and prolific the Beatles really were.  Early on it was

planned that they produce two albums a year and a few singles in between, to stay in front of a booming audience  –  unthinkable output by today’s standards.  McCartney’s Paperback Writer was one such single.

Made in 66 after the Rubber Soul album, Rolling Stone Magazine’s Beatle’s at 50 review labelled this phase as game changing in paving the way for their follow up of Revolver and the Beatle evolving sound.  McCartney’s exceptional bass play was also recognized  “as if they had just unlocked a whole new realm of potential for the instrument.” 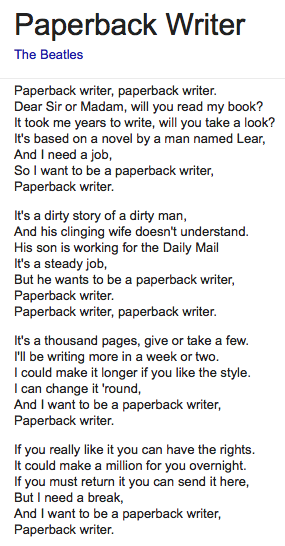 “It could make a million for you overnight”

It is tempting to play with the notion that the reference to Lear was Shakespeare’s King Lear, the tragedy in which an aging king gradually goes mad after disposing his kingdom to his daughters based on their flattery of him.  Especially if I  imagined writing something cheeky about the humble Trump known to imbibe in flattery.  He did once describe himself as “King”, but it was “King of debt.”

Given the financial world’s knee jerk response to his win, I think a review of the overnight change in market narrative is the story.  Over a 30+ year career there are not many episodes I recall that so quickly unleashed such a perceived inflection point.

Maybe the most obvious market fallout is certainty.  After grid-locking Obama for years, the GOP’s control of house and senate pretty much gives them absolute power.  Part of this certainty is new fiscal policy.  The notion that rates have been too low for too long is coming of age.  With the limits of monetary policy providing anything remotely resembling  the vaunted ‘economic escape velocity,’ anything new on the policy front is probably viewed as panacea.  Infrastructure spend has been put forward for years now as a needed option.

Who knows how markets will play out of course, for Trumpenomics it’s early chapter one.  For now, some select random prologue.

It really wasn’t that long ago that Republicans were threatening to shut down government over borrowing authority bills, the self-identified fiscally conservative.  Welcome to the other side.

Its about a year since the Fed raised rates for the first time and we’ve had to endure the painstaking noise of each meeting being ‘live’ and yet hikes deferred because of a laundry list of reasons…slow global economy, China devaluation and a China bubble, strong $US headwinds,  concern over emerging market debts, Brexit, that raising rates diametrically opposed the panic emergency policies of QE and negative rates by an ECB and BOJ running out of things to buy.  The dialogue and tensions surrounding the next 25bp ranges from  nonsensical to confirming a legitimate fragility.

Income disparity and a weakly employed middle-class voice drove the election results.  Is this a form of repudiation of the Fed’s monetary policies?  For all the talk of how blunt  interest rates policies are, there is no question that they, and QE, enriched Wall St, those responsible for the crisis, and elevated income disparity.

Italy and Deutsche Bank headlines prove Europe’s banking system and EU structure remains a fragile experiment.  Financial repression seems to be keeping Europe papered together but after all these years it hasn’t corrected significant underlying debt and banking problems.

In lieu of job creating capital investments, corporate America has been spending their earnings, even borrowed, to buy-back stock and increase dividends.  This says many things possibly but at the very least exasperated the problem of income disparity, did little for employment and possibly suggests there aren’t identifiable deep pools of business building investment opportunities for the private sector to pursue.  Certainly lack of capital isn’t holding corporate America back.

While campaigning, Trump himself described markets resulting of the Fed’s policies as being a “big fat ugly bubble.”  I cannot comment on his forecasting track record but can only assume it is no worse than the Fed’s.

In 2008 when Obama won, he inherited $10T of US government debt which then cost $450B/yr to service.  Trump inherits $20T, which through the power of Fed policy and market manipulations costs a lesser $430B/yr to service.  The old school bond trading concepts of crowding out markets with supply have been annihilated by central banks.  Will the vigilante’s return?  Every basis point increase in funding cost is adds $2B to the deficit annually.

US Car loans total in excess of $1T with delinquencies rising and used car values shrinking.  $1.3T student loans remain a headwind to families and post grad advancement.  There are areas of growing concern over commercial real estate loans.  The $29T of corporate debt has taken corporate American leverage above crisis 09 levels.  As much as savers and pensions are desperate for higher interest rates, the collective system the Fed has nurtured may not be.  Interest rates matter to those in debt.

Despite initial panic selling of stocks when Trump won, a new narrative quickly emerged, something years of extreme monetary policy stretched to do.  Reflation.

Tax cuts.  Talk of a $T infrastructure spend.  Stocks and Dr. Copper soared.  The $US went up, rates rose across the yield curve 25-55 bp…aside from stocks booming this was the exact danger scenario the financial world and central banks have been both wanting and fearing.  Even while in QE mode, EU and Japan bond markets sold off.

There is an odd faith in this new Trumpenomic narrative.  The predisposition for stock market performance as a tell suggests all is bullish.  With Fed policy on trial and the bond and currency markets quickly voting against them, its now easier for them to hike and some of the would-be damage is baked in.  Copper has soared 25% in the latest month while the industry still talks of foreseeable surplus.  Sure stocks are up but from very expensive levels, and notably with newly competing higher rates.

The China bubble has not gone away, capital still seeks flight and the Chinese are allowing the $US dollar to do what it is doing against every other currency – strengthen.

Corporate tax cuts and a window for repatriations sounds great for corporate profits and more buybacks and dividends.  But if a flush America hasn’t been creating the quality jobs already, why would more of the same do so?  The personal tax cuts for the rich will further elevate the issues of income disparity.  As will GOP promises to cut estate taxes.  Sounds like the disenfranchised middle-class vote against the elite could turn out to be very profitable, for the elite.

Maybe air coming out of the bond market bubble seeps further into a stock bubble.  Maybe we’ll finally get to test the economy’s sensitivity to higher rates and rising dollar.  Or how sensitive the more fragile EU and emerging world are.   Will we now get to test how too-low and too-long the Fed has really kept rates in a world of surprises and unintended consequences?

The bottom line for Trump’s Chapter One is this.  The narrative is he’s going to spend and cut taxes, pushing rates and funding costs higher, in an enormously over-indebted world of expensive assets juiced by years of central bank experimentation…i.e. right into “that big fat bubble.” And if he doesn’t, then why are bubble level equity valuations jumping higher?

If it’s US deficits that will be ringing the warning bells, then we may get to wait awhile, and endure the pains and gains in the interim.

But if it’s foreign markets that trigger warning bells, either via currency volatility or fallout of new trade stance or political turmoil, then we may hear warning bells sooner than later.

Very diverging monetary policy.  Diverging trade intentions.  A China bubble.  A fragile EU awaiting multiple election results.  A forever desperate Japan.  Bush had a tech crash.  Obama had a housing/credit crash.  The knee-jerk of Trumpenomics, Chapter One suggests it’s not a stretch Trump is going to have something huge too.

iThere are no comments

Begin typing your search above and press return to search. Press Esc to cancel.